TFTeacher.com came online on November 23rd. By the latter half of December, the blog has grown to 2,000 average daily readers with a DAU/MAU ratio of 0.4. Here’s how it got there. 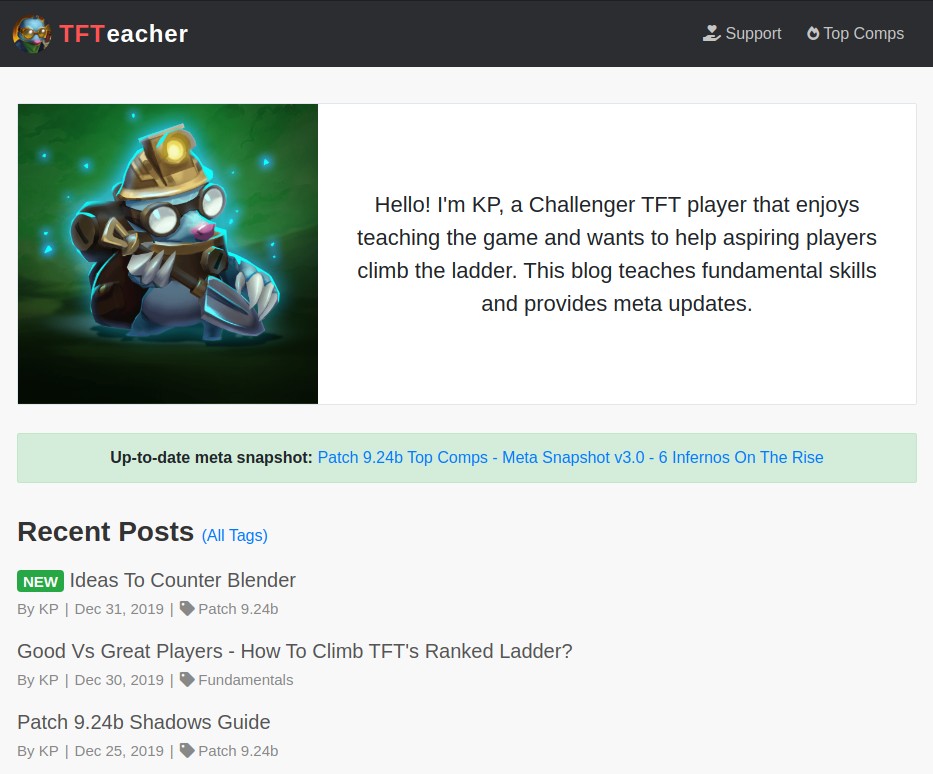 There are two fundamental parts to building a successful blog. First, there needs to be an opportunity paired with an initiative to act on it. Second, the blog’s content needs to work; the author needs to understand who they’re writing for (the audience), what the audience wants to read (the message), and be able to write well (i.e. good structure and prose).

For TFTeacher.com, the opportunity came when I noticed that a couple highly ranked Teamfight Tactics players were posting guides on the CompetitiveTFT subreddit. TFT is a burgeoning game launched by Riot Games in mid-2019. Even though its playerbase is relatively large, the game is so new that its content ecosystem is underdeveloped with sparse competition. To me, TFT was the perfect content space to create a new blog for. I was also well positioned to write about TFT. I was decent at the game (my elo peaked at top 50 in the North American server) and spend a lot of time playing and watching it. I might as well channel the time spent into something productive.

I jumped on this opportunity and built TFTeacher.com in one weekend. I’ve experimented with many websites before and have a decently efficient pipeline to launch websites. With the website up and running, the first course of action was to test this idea. The second ranked season of TFT just started and I wrote a quick guide for the season’s new content. The post was titled “TFT Set 2 (Rise Of The Elements) - Detailed Guide” and I shared it on /r/CompetitiveTFT. The reception was decent but not wholly convincing: the post had a 95% upvote ratio with 36 points. I had to keep experimenting.

Who was the audience? TFT players. What do they want to read? TFT is a constantly changing game and players want guides to help them keep up.

The next post was a guide to playing a specific team composition called “Ocean Mage Summoners”. The post was titled “In-Depth Guide To Playing Ocean Mage Summoners” and I also shared it on /r/CompetitiveTFT. Again, the reception was decent; the post had a 77% upvote ratio with 36 points. When a reader asked me if they could translate the post to Japanese, I knew that TFTeacher.com had potential.

An important part of building a blog is marketing it; if no one reads your writing, what’s the point? One way I marketed TFTeacher.com was by creating a new account with the in-game name “TFTEACHERºCOM”. I increased the account’s elo enough to get into the games of high elo Twitch streamers. I found myself in several games with Scarra, who streams with 5-7k concurrent viewers, and consequently received considerable free attention for the blog (more details here). As fun as this was, nothing has been more effective for TFTeacher.com marketing-wise than creating valuable content and sharing it on Reddit.

One of the blog’s biggest successes came when I added a “meta snapshot” page to the website (TFTeacher.com/comps). TFT is a game that’s constantly changing and it’s hard to keep up if you don’t have the time to play and watch streams everyday. That’s why many players rely on meta snapshots from high elo players that tell them what team comps are currently strong. However, most meta snapshots exist in hard to discover Imgur albums or Google spreadsheets. A “meta snapshot” page on TFTeacher.com is easier to discover and search engine indexable. It’s also relatively scalable content; the meta is constantly changing and it’s much easier to update the snapshot than write a blog post. Meta snapshot posts were also very popular on Reddit (for example).

Overall, the growth of TFTeacher.com has skyrocketed. This is probably what product market fit feels like, in a mini way. On average days, the blog has 2,000 daily readers. On good days, this number goes above 8,000. The blog also has a high DAU/MAU ratio at 0.4. According to Sequioa, the standard DAU/MAU ratio is 0.1 to 0.2.

The feedback from Reddit threads has been very positive and when “TFTEACHERºCOM” is recognized in-game, it elicits wholesome feedback as well. The other day, someone even thanked me in a DM for helping them with their depression (O_O). Apparently, TFT distracts them from it and they really want to be good at playing the game. 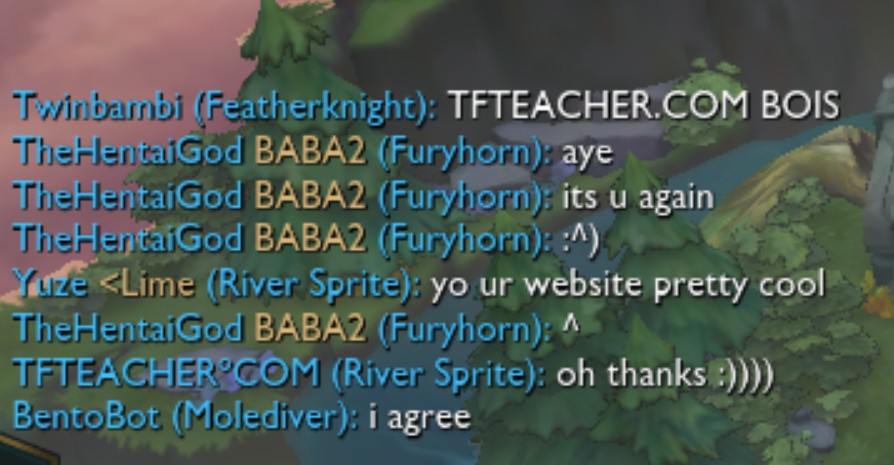 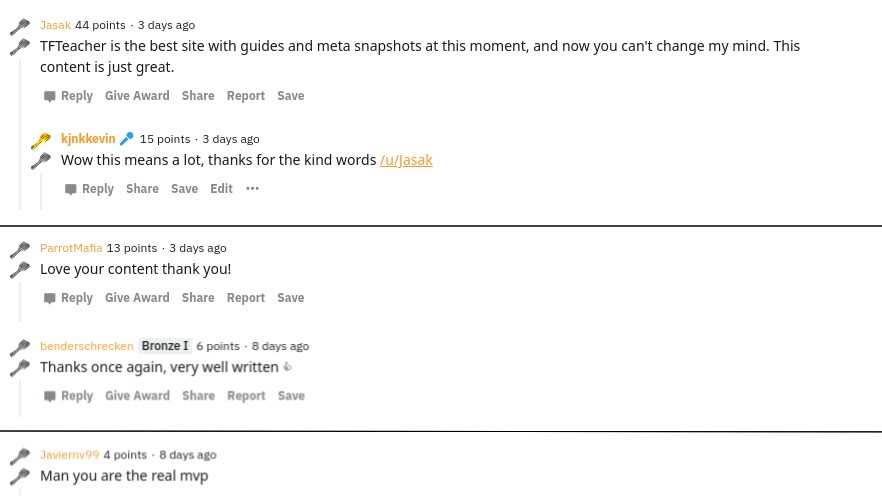 I’ve been experimenting with different projects for the past 8 years or so and have found product market fit only 3 times (TFTeacher.com included). I’m not sure what gives me the energy to keep trying. Is entrepreneurship genetic? I think it’s more like a drug with a very special kind of high. The high happens when you’re able to positively affect other people at scale with your words or with what you’ve built.